The drive from Ponta do Ouro to Tofinho Mozambique is long! It took me approximately 10-12 hours. Simply drive north from Ponta through Maputo, keep going past Xai Xai until you reach Inhambane.  Then make your way to Tofo beach and Tofinho is the small little enclave about 2 kilometers south of Tofo Beach.

I stayed in a villa overlooking the limestone cliffs. It was just past the FRELIMO monument. I arrived late in the evening and there was a huge Indian Ocean swell coming in. I listened to the waves crashing into the cliffs all night long. 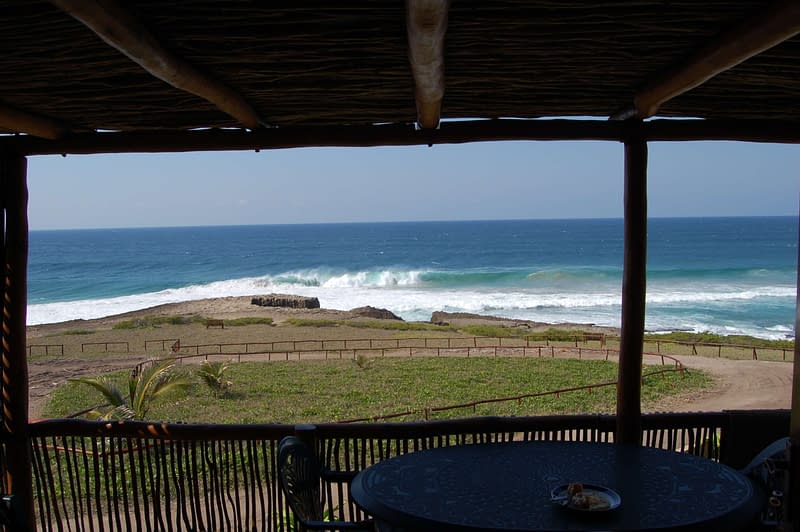 Photo from my front porch.

I was here during the winter months (southern hemisphere). This is the time of year when surfing is supposed to get good due to the powerful ocean swell that moves in from Antarctica. The water is warm here, due to the warm water Agulhas current that flows south along the coast of Mozambique and South Africa.

From June until December is the whale migration off the coast of Tofinho Mozambique. The most common whales sighted are Southern Right Whales and the Humpback Whales. The humpback whales are the more acrobatic with their breaching and they were amazing to watch.

The whales migrate up the coast to feed in the cold waters of the higher latitudes and then on to warm waters to breed and give birth.

The whales breaching was amazing, I would watch them everyday in front of the cliffs. They can be observed all up and down this coastal area.

I had some good fishing in the area. There are also great fish, prawns and lobster available that can be bought from the locals. They would just walk by my villa and I would negotiate with them. A couple times (weather permitting) they would literally swim out and come back an hour later with live lobster.

I also did some fishing of my own. 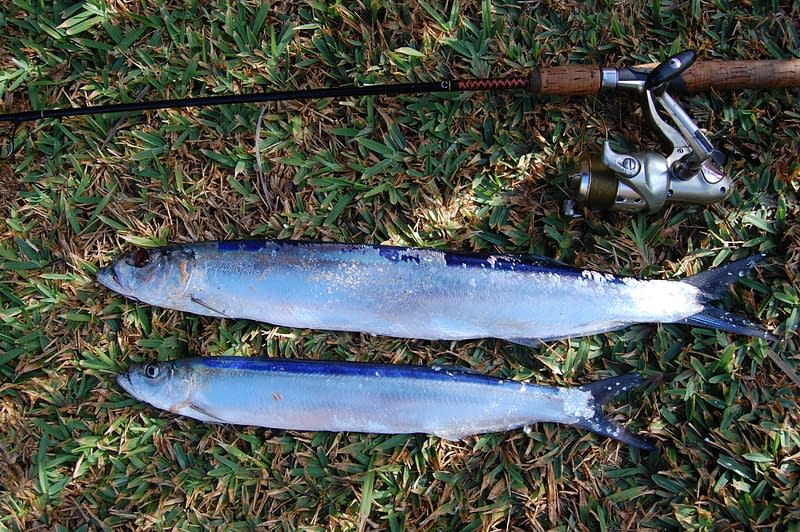 My catch for the day. These fish were edible but were a bit bony for my taste. 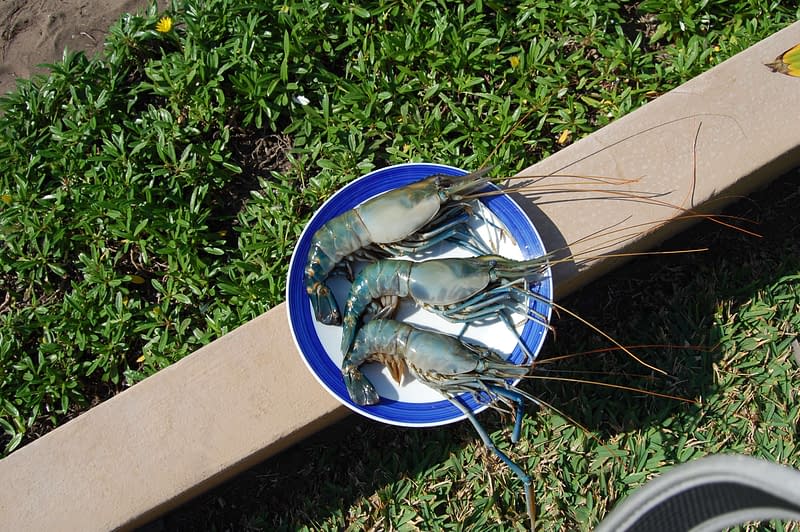 The jumbo prawns were fantastic. They would come right to my unit and sell these. Lobster was also usually available.

There were several areas to go snorkeling at Tofinho and Tofo Beach. The only issue at this time of year is that the seas can get a bit rough and this limits accessibility.

When there is little or no swell coming in, then I would venture out in front of the FRELIMO monument. It is possible to swim out from the beach and around the point. This was astounding due to the large schools of fish and the limestone rock formations that are under the water. There are underwater arches to swim through. Simply amazing.

What is an added bonus of going snorkeling at this time of year is that the humpback whales are migrating. They did not venture this close in to shore and I did not swim with them. However, when you are under the water you can hear them communicating with their echolocation. I could clearly listen to them while I was under the water. It was a simply amazing experience.

Snorkeling in Tofinho Mozambique does have a graveyard feel to it. This location is near “execution rock” where many dissidents were executed over a 40 year period by the Portuguese and also FRELIMO after they came to power. Although I did not see any bones on the ocean floor and there had been no executions here for at least 2 decades.

There are also a lot of whale sharks in the Tofinho Mozambique area. It is possible to take a tour boat out to swim with them if you can stomach something like this. You and the whale shark with 30 other people in the water. No thanks.

However, one day a whale shark ventured in pretty close to the surf line up and we were able to paddle over and check it out.

Paindane is a world class beach and snorkeling area about 40 kilometers south of Tofinho Mozambique. It takes about an hour to get there from Tofo Beach. I had to go through Inhambane and then navigate east again through the countryside.

I loved the drive through the countryside. I would also take advantage of coconut purchasing opportunities on the way back. The locals would climb the coconut tree right there on the spot for a reasonable price. Usually dirt cheap. Make sure to agree on the price before they climb up the tree to avoid any confusion.

I actually attempted to climb a coconut tree at one time. I was nursing scrapes and abrasions on my inner arms and thighs for a week. 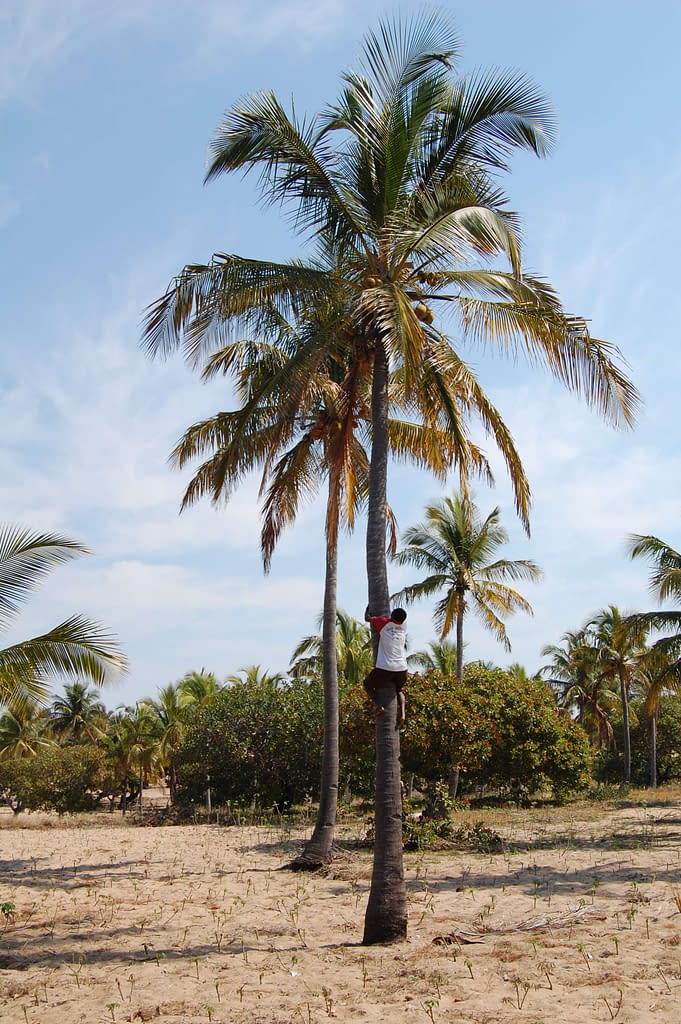 Climbing for coconuts on the road to Paindane. 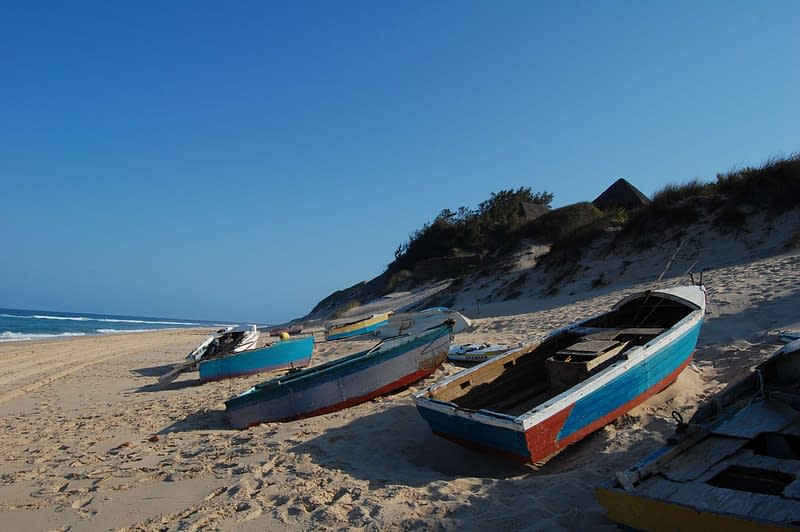 Many of the locals in Mozambique still practice a subsistence lifestyle. They have farming plots outside of town and also make use of the abundant food source the ocean provides. As a result, it is a common sight at Tofo Beach, Paindane and Tofinho Mozambique. 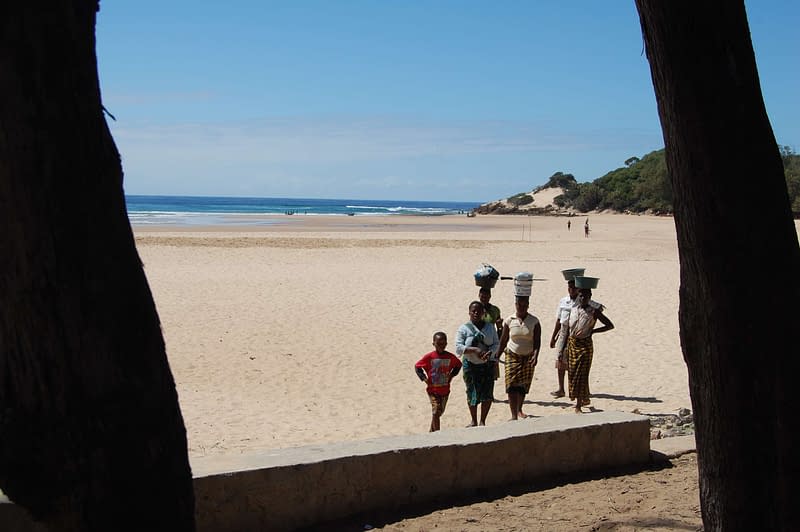 The locals harvest shellfish off the rocks at low tide. This is a common sight at Tofo Beach and Paindane when they return after the morning’s work. 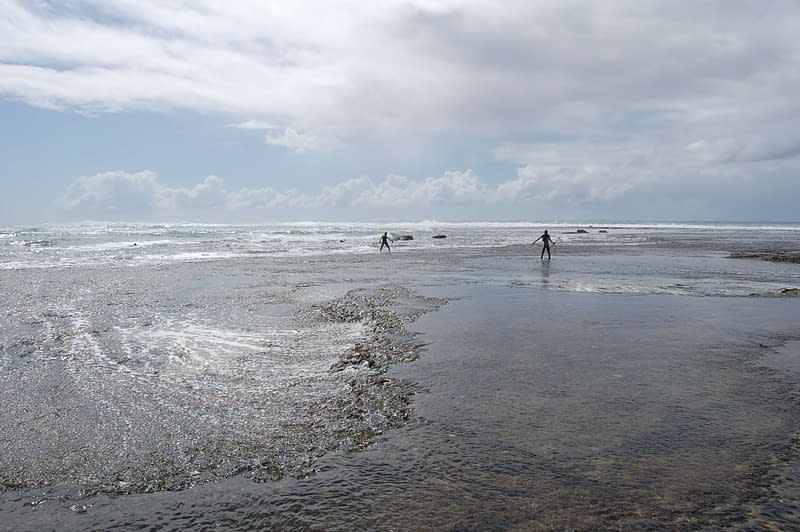 When the seas are rough they go spear fishing inside the reef that runs between Tofo Beach and Tofinho Mozambique. 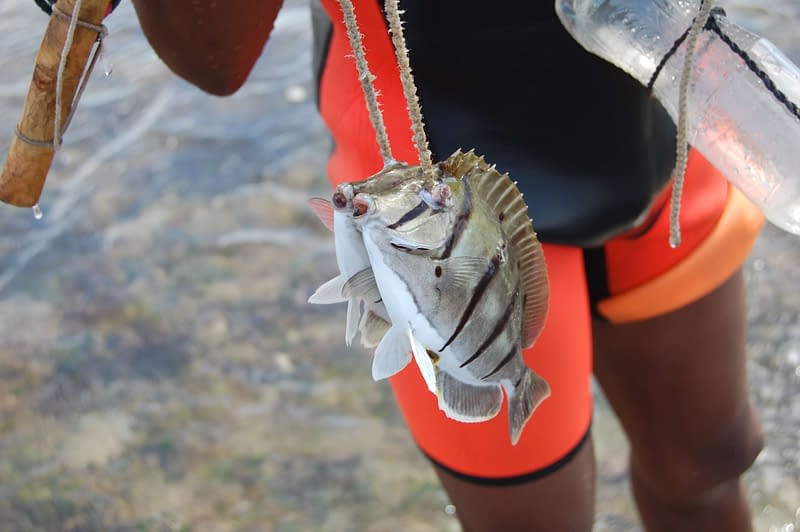 The fishing is not so bountiful when the seas are rough. 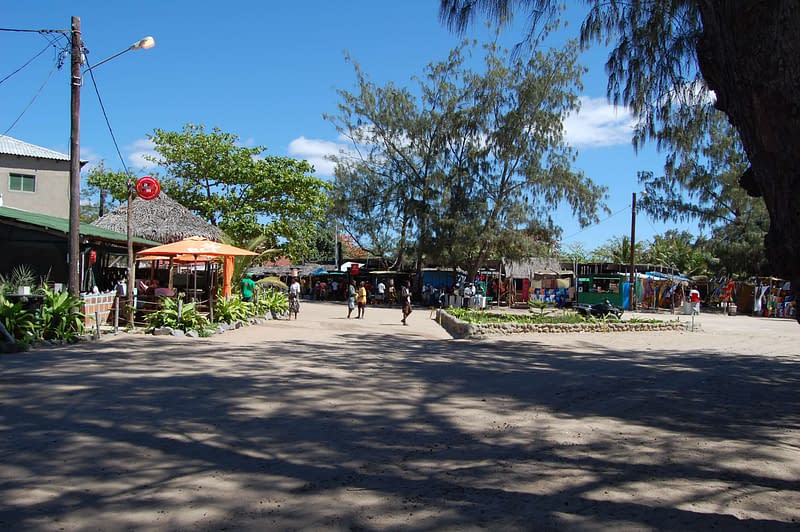 There is a farmers market in Tofo Beach.

Surfing is pretty good, but when there are waves it will be crowded. The best surf spot is the point break near the FRELIMO monument at the bluff in Tofinho Mozambique. The local surfers are mostly Afrikaner and they are a tight knit group. They are also good surfers and waves will not always be available.

Inhambane is about a 30 kilometer drive inland. There is a larger market there and more local markets. There is some interesting colonial architecture in town.

In Inhambane it is possible to catch the ferry across the Baia de Inhambane to Maxixe. This town has the immigration office for the Inhambane province and it is necessary to go there for visa renewals. I went there 2 times as I was in the area for 2 months.

The ferry can be a bit of an experience. The motor broke down on the way. We made it but I drove around the bai the next time I renewed my visa.

The tide gets extremely low in the Baia de Inhambane and the boats are landlocked until it comes back in. 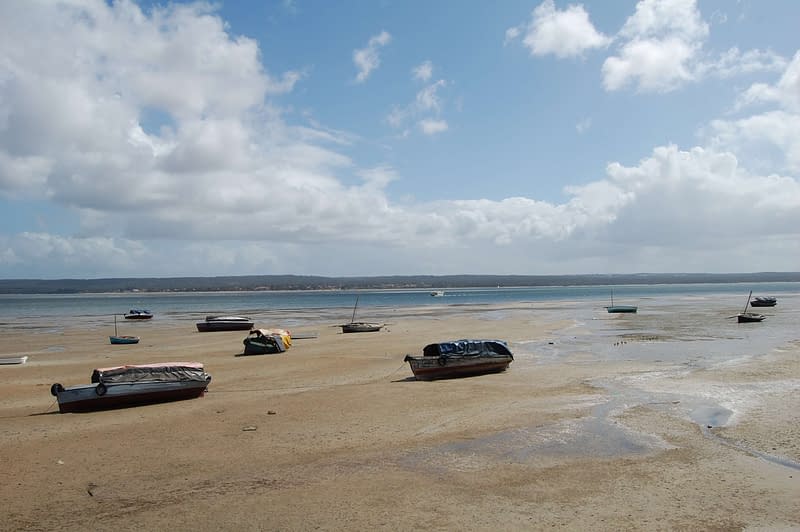 Low tide at the Baia de Inhambane. That is Maxixe on the other side of the water. 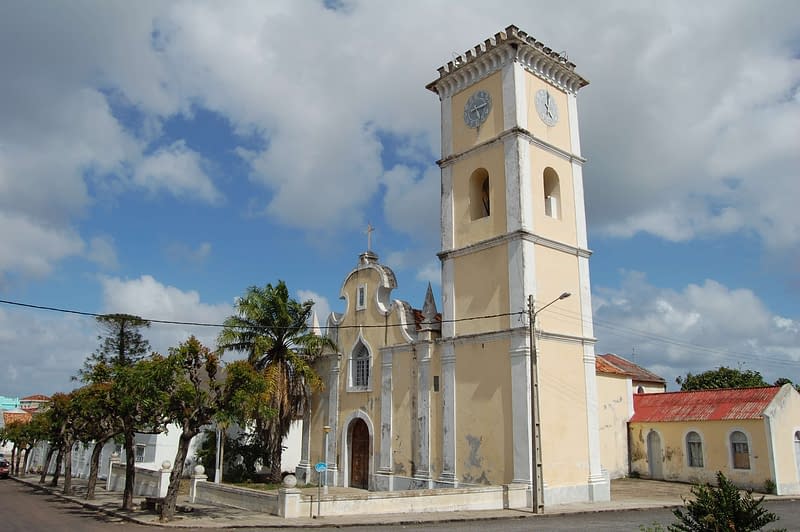 170 year old Cathedral of Our Lady of Conception located in Inhambane Mozambique. 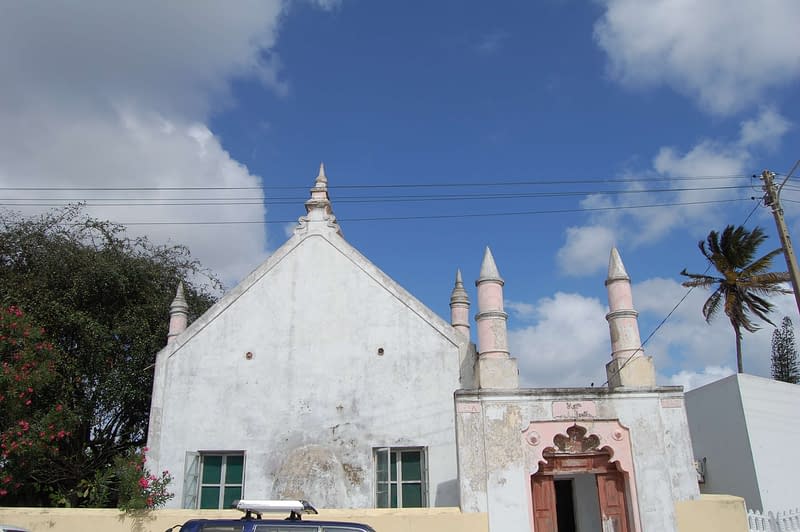 Photo of mosque in Inhambane. The Arab Muslims had also intermittently colonized sections of Mozambique.

The Drive From Tofinho Mozambique to Johannesburg

The time had come to leave Tofinho Mozambique and I planned to go to Mauritius. I was going to drive back to Johannesburg and spend a couple nights there, then catch my flight to Mauritius.

Mozambique is a vast country and the drive to Jo-burg from Tofinho is long! From Tofinho Mozambique I drove through the Lebombo Border Control to reenter South Africa. This border crossing is total chaos, nothing is marked. If you haven’t done it before it is difficult to navigate. When I was half way through I ended up giving some guy “beer money” to get me into the right line.

Once through the border crossing it is a nice drive through the rolling hills of NE South Africa. A good stretch of road to make up some lost time.

Once I got to Jo-berg it was chaos again. They had put just about every freeway exit ramp in the entire city under construction since I had last been there. Nothing was where it should be. I ended up flagging one of the locals at the stoplight. Ironically, they were on their way to work at a hotel that was right next to where I was staying! I followed them and they pointed me in the right direction as we passed.

I was looking forward to Mauritius.