Teluk Bahang Reservoir features an idyllic panoramic view from the top of the dam encompassing the Straits of Malacca, Teluk Bahang village and the interior mountains of Pulau Penang. Also, the 500 meter racing lanes were easily viewed from the dam.

A view from the dam of Teluk Bahang reservoir and the interior mountains of Pulau Penang.

For the 2017 event, a total of 50 international and local teams competed for the 50,000 ringgit in prize money. As a result, competition was fierce but friendly. There were 26 international teams and 24 local Malaysian teams.

Additionally, the international teams were from diverse locations and cultures. The visiting dragon boat teams came from far and near including Singapore, Iran, Philippines, Brunei, Hong Kong, South Korea and Thailand.

The competition was fierce but friendly at the Penang Dragon Boat Festival 2017. Here the teams dig in at the start of the 500 meter race course.

The culmination of the 2 day event occurred on Sunday afternoon. There were many competitive races throughout the day. However, the International Premier Open got my selection for the best race of the 2017 festival. This is because it featured a highly competitive line up with teams determined to take home the prize. As a result, the crowd was treated with a finish that was nearly too close to call.

The top three places of the International premier Open went to the 1) Pacific West Dragon Boat Club (Penang) 2) Team Brunei Darussalam 3) PDRM Penang. The teams were competing in lanes 2, 3 and 4 respectively. Additionally, the race featured a nail biting finish that I captured in the photos below. During the final 10 meters it was neck and neck.

All 3 teams were neck and neck going into the final 10 meters of the 500 meter race.

However, with less than 5 meters to go the Pacific West Dragon Boat Club (Penang) nudged ahead into the lead.

As all three of the teams gave the extra push at the finish, it appeared that the local Pacific West Dragon Boat Club was pulling decisively ahead of the pack.

Indeed, the Pacific West Dragon Boat Club would hold on for the win.

It was a sweet victory for the home team. 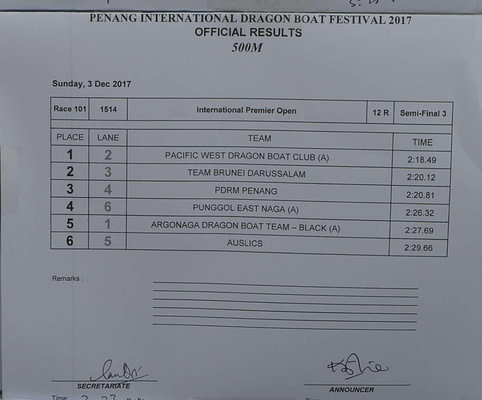 The final results as posted for the International Premier Open competition.